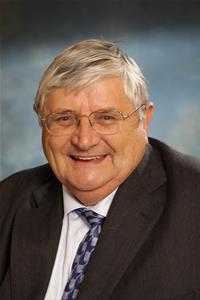 I was educated at Fleet Boy’s School and then went on to study at the Technical Grammar School, Ripley. On leaving school, the early part of my career was spent in Textiles at Brettles and then as an Area Sales Manager for Charnos (1966 – 1986). I then set up my own transport business, retiring in 2009. I enjoyed playing cricket and golf, although I have not played for some time.

Singing has always played a significant part of my life, from 1951 as a chorister at Milford Church, then Duffield Church and Derby Cathedral. In later years, I joined the choir at Ashbourne and have sung at Gloucester, Hereford and Peterborough Cathedrals and also York Minster. Regrettably, due to age my voice is no longer up to it.

To be honest, I did not decide to become a Councillor. I complained to my local Councillor so much and told him what I though should be done, he told me to stand for the local Town Council. I was then elected and no one was more surprised than me. I felt that it was so important to ensure that the money was better spent than it previously had been. I aim to try and counter the rise in political correctness and to give us all a greater say in the happenings at Council meetings.