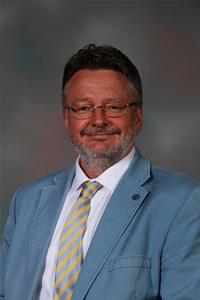 Currently the leader of Derbyshire County Council, I was elected to this role in May 2017 and just prior, and overlapping, I was the Chief Executive of the United Kingdom Vineyards Association Chief Executive (now WineGB). I was first elected to Derbyshire in 2009. We own a small Derbyshire vineyard, which is becoming something of a small tourist attraction and a couple of holiday cottages.

I was the Cabinet Member for Young People in Derbyshire County Council between 2010-13. I have also been a Local Government Association Culture, Tourism and Sport Board member since 2014, using my heritage and tourism skills and experience there. I am a District Councillor and Cabinet member at North East Derbyshire District Council too. Also, I was a Constituency Officer for an East Midlands MEP for a couple of years.

Before politics, I was an archaeologist and researcher for nearly 20 years, especially in the field of rock-art and I delivered a successful field school in Malaysia with the University of Nottingham. I also wrote ‘Hunting in Britain: from the Ice Age to the Present’ published by The History Press in 2009, plus numerous articles for books and journals – also book reviews. Until May 2013 I was a Chairman of Creswell Heritage Trust (a now world famous Ice Age site).

Before returning to education and then archaeology, I had a whole range of local jobs including working at Derby Pottery, where my father worked for 43 years until his retirement. I even did a stint as a chocolate packer in Thorntons in Belper one summer.

I am the son of profoundly deaf parents, and suffer a few hearing related issues myself being totally deaf in one ear and with a mild/moderate loss in the other. Some might say this is ideal for a heated debate in the local political arena – I couldn’t possibly comment. I am also the father of a child that is also deaf and is a cochlear implant user. So deafness is an issue I am particularly exercised about.

My hobbies include wine, walking and fencing (epee) – although not necessarily in that order – or at the same time!

I have always been quite engaged on various issues and never shy about speaking up. I was a TU representative at work when I was an archaeologist and this probably led me into politics in some small part. However, there were wider issues around my community, planning and just simply being motivated to get involved that saw me start on the road to local politics – and what an exciting and interesting time to be a politician!